Another fabulous race report from Gill following her fantastic performance at Boston on Monday. 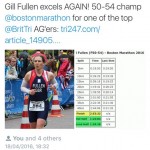 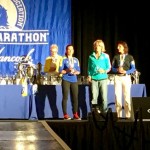 “So, really huge thanks to everyone for your support and congrats, I am humbled by your constant encouragement. Here it is, a quick précis of the race that is Boston (pron “bwourston”) marathon 2016

The days leading up to the marathon were beautifully bright and sunny, but the temperatures were kept low by the arctic wind blowing in from the Atlantic. The day of the race dawned equally bright, but the temperature was mild even at 5.30am as I headed out to the bus for the hour long journey to Hopkinton. There is no bag drop at the start, so all clothing not needed for racing has to be discarded and is donated to the local homeless charities, (who this year will be sporting some interesting styles including Christmas pyjamas, onesies and boiler suits). The temperature continued to climb and made the wait at the race start fairly pleasant, however nearing 10am the sunscreen was on offer and it was clearly going to be a hot one.
The start waves were well managed, but warming up was nigh on impossible once you were corralled in your start pen, which rapidly became very cosy. I felt for the other Harriers in subsequent waves with yet more congestion. It was equally busy as the race got underway and impossible to run at any pace with so many people filling the course. I thought this would ease as the race progressed, but because we were all running at a similar pace there was actually never really a clear path and keeping a good rhythm proved challenging.
Water stations every 2 miles were packed with runners dodging around, but in the heat getting regular fluids was essential, so missing many of the stations was not an option. My fueling strategy fell apart at mile 10, when on gel number 2 my stomach told me that gels were definitely poisonous, so I had to back off and rely on water once again.
The first 6 miles I had aimed to run a little faster than my target average pace, as it’s mostly downhill, but rolls continuously. After that I was to settle into my pace and get through the first half easily, noting the good advice of a seasoned competitor that this race dosen’t start until mile 13. Over-doing it as usual, I hit the first 10 miles hard when the crowds allowed and had a sneaking suspicion that I would regret it later. By half way I was on track for a good time, but my quads were starting to feel the strain, so when we hit the hills at mile 16 I was already suffering. The uphills didn’t feel as bad as I had expected, but they did slow the pace drastically; the worst part being that now my quads were screaming so I couldn’t pick up the faster pace I had planned for the downhill sections, so my average pace dropped like a stone.
The last 8 miles were into an increasingly strong headwind and seemed a very long way, including yet more inclines, which were ever more painful. I knew I was well behind my target pace by now, but there was little I could do about it but keep pushing for the finish with what I had left. Finally I turned the corner onto Boylston and the finish chute, only to spot a lady running near me. What a cheek! In true SFB style I dug deep to produce a sprint(ish) finish and beat her to the line.
I managed not to throw up. I didn’t cry. I didn’t collapse. I was a little disappointed with my time, which said 2:55 as I crossed the line, but slightly happier when I realised this was gun not chip time and I had managed 2:53 hours and won my age group. This is frustratingly close to a number of targets … Course fv50 record, UK fv50 marathon record to name but a few. Had I raced it with more discipline I could possibly have hit these targets, but for now they remain to spur me on another time….possibly… if I can put myself through all that again.”