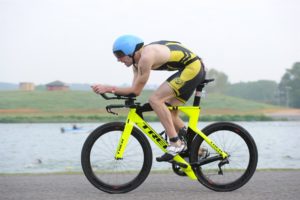 🏊‍♂️ I began my sporting life as a swimmer and always had aspirations to race at the highest level. My career started off in the pool and progressed into open water swimming, becoming National Open Water Grand Prix Champion in 2007.

🏊‍♂️ I moved into the then British Swimming Intensive Training Centre (now known as the Bath National Centre for Swimming). I qualified for the London 2012 Olympic trials over 200m butterfly but sadly I ripped my infraspinatus tendon in my shoulder three months before trials which effectively ended my hopes.

🏃🏻‍♂️Later that year I had a shoulder operation to reattach my tendon and I began building back into sport. I had done some research and found that the World Triathlon Finals were coming to London. Further research found a niche that suited me; there was an Aquathlon, comprised of a 1,000m swim and 5km run. I qualified for this event, and finished 8th.

🚴🏻‍♂️ Since then I have competed for GB in 12 international events and managed to achieve 10 podium places.